This winter brings us a cold present: Несмеяна (Nesmeyana) — a band so disturbing and horrorful that they definitely deserve their attention on vinyl. Named after a princess-who-never-laughs from russian folklore, Nesmeyana were a duo from Voronezh, led by a visual artist and composer Alexandr Seleznyov (lyrics, synths and keyboards) and Viktoria Shikova (vocals). Formed in 2009, they were active for six years and produced seven self-released albums, sharing them with the world mostly as free mp3's. Despite the raw quality of their home-made works, they managed to catch attention from serious russian musical media, such as zvuki.ru and colta.ru and some of them even named Nesmeyana as one of the best Voronezh bands of the last 20 years.

So what makes this project so special and unique?

In contrast to lots of contemporary Russian bands who strive to get international attention by singing in English and overproducing their sound but getting rather mediocre results instead, Nesmeyana decided to pay attention to their own history and were bold enough to explore the most outrageous dance music styles of soviet 80's — so called "cooperative disco" and "orphan pop". An absolute icon of "orphan pop" were Ласковый май (Laskoviy May), Soviet Union's first successful boys-band. Incredibly popular at that time, it is strange how this cheap ersatz of euro- and italo-disco, often sung with quite unpleasant moaning vocals could provoke suicide among adolescent soviet schoolgirls. "Pop music in Russia always smelt of death" — says Nesmeyana's Alexandr Seleznyov, implying not only its destructive content but often a direct involvement in criminal business for some music makers, and "orphan pop" was no exclusion.

A similar situation was evolving around "cooperative disco". More popular synth disco acts of that time, e.g. Мираж (Mirage) or Комбинация (Combinatziya) gave birth to a whole plethora of undiscovered underground artifacts like Барби (Barbie), Анжелика (Anzhelika), Констанция (Constantzia), hundreds of them all over Soviet Union, some full with creative weirdness, which could be obvious even in their names like Ласковый Бык (Tender Bull). Trying to describe this thriving scene, critics coined a term "cooperative disco", often referring to amateur pop music mostly made in province, with rather low chances of getting a nation-wide fame, but with a quite solid pop potential nevertheless. Extremely hard to find and partly lost forever on soviet tapes, all these bands were the main source of inspiration for Nesmeyana, but only in terms of musical arrangements and composition. When it comes to lyrics, Nesmeyana unrelentingly trashes all the cliched love themes, prevailing in the typical naive "cooperative pop" song, and comes up with an alternative, more harsh and more honest depiction of that uneasy end-of-soviet-80's time.

Crime, prostitution, killings, banditism, drug abuse, poverty, decay, war in Afghanistan — all these disturbing symptoms of the Soviet Union's disintegration up to its final collapse find their perfect place in Nesmeyana's lyrics. And the most dominating theme which gradually grows so big until it fills all the spectrum of their latest discography is, of course, death. With this formula Nesmeyana succeeds to create modern songs for russian Thanatos unlike any other russian metal or gothic band. Actually, a solid metal background is clearly audible on some of their albums in form of distorted basslines and sinister synth riffs, as both Viktoria and Alexandr confess: "before starting Nesmeyana we used to play various vandal rock". Seleznyov still continues to work on such "vandal rock" project called Сукина дочь (Daughter Of A Bitch) after Nesmeyana has disbanded in 2014. 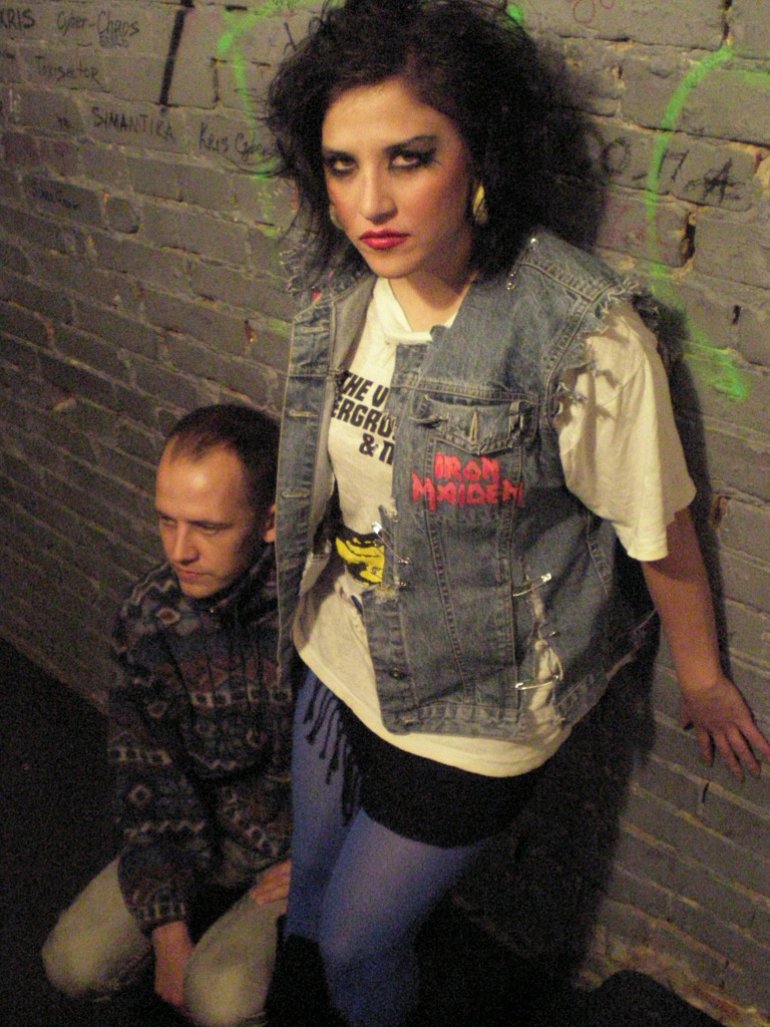 Over the years of their creativity, Nesmeyana have developed their own distinctive "horror-trash-synth-pop" style, occasionally blending it with elements of musique concrete and post industrial noises. Notable russian media and critics defined it as "red disco", which now not only refers to Nesmeyana's musical heritage but also to a blooming homonymous community residing on the Russian facebook-alike social platform vk.com, currently consisting of more than 10K music lovers and dedicated to lost soviet "cooperative disco" artifacts.

With their debut album Щас ты не звонишь (Now You Don't Call) Nesmeyana begin a horror journey through the dark decades of 80's and 90's exposing the most troubled themes of Soviet Union's "post-perestroika" period — premature deaths of AIDS and drug addiction, Afghan war victims brought home in coffins, devastated industrial landscapes where often rape & murder takes place; this album tells us some unpleasant but quite realistic stories which may have indeed happened in the past. A combination of a simple drum machine beat, silly synth bubbling (which can compete with The Residents in its cynicism) and Seleznyov's provocative, full of black humour lyrics produces an "effect of a bomb, exploding in your head" and from one album to another their "red disco" style gets only better. It turns out that Nesmeyana's approach to re-thinking and re-interpreting of the last decades of dying Soviet Union can be nearly inexhaustible in terms of creativity and might even eventually open a real portal to hell. Who knows, maybe that's the reason why Nesmeyana do not record music anymore, the duo is mysterious about that.

While some may say that songs of Nesmeyana is nothing more than a sort of odd, sarcastic post-modern prank and could not be taken seriously, still the disturbing images they create are descriptive enough to embrace the whole epoch in soviet and post-soviet history. This could be a reason why this studio project (Nesmeyana did very few gigs when they were active), despite their short existence, earned eternal love and devotion from russian-speaking fans all over the globe. Summarizing everything written above, we may conclude that Nesmeyana is definitely not for everyone's ears, but to be honest, how often do you have a chance to listen to some cool music from Voronezh?