Nearly a decade ago some serious Russian synth music communities on the web rediscovered a couple of electronic themes from the music score to the soviet drama «Flights in dreams and reality», which appeared on the screens back in 1983. One of them, often named as "dance at the sculptor's party" after a corresponding movie scene, was of particular interest due to its rather simple but memorable space tune with a pulsating disco beat.

Since the soundtrack was too diverse, including different genres like jazz, orchestral pieces, electronic music and pop songs, there were doubts that it could be written entirely by a single person. This led to various theories, e.g. some listeners said that it could be an unknown performer covering certain unidentified themes by Edouard Artemiev or Vangelis, while others stated that one should just look into the movie's titles for the composer's name — Vadim Khrapatchev. Besides, there were thoughts that these compositions could be recorded using the legendary EMS Synthi 100 synthesizer, the one and only existing unit in Soviet Union at that time.

This last assumption was pretty close to the truth but any other information still remained unconfirmed and up to now all attempts of contacting the author for any clarification failed. However this summer we were lucky enough to get in touch with the composer in Kiev, Ukraine and we are incredibly happy to reveal some details about these two electronic gems as well as present them on this lovely 7" record. 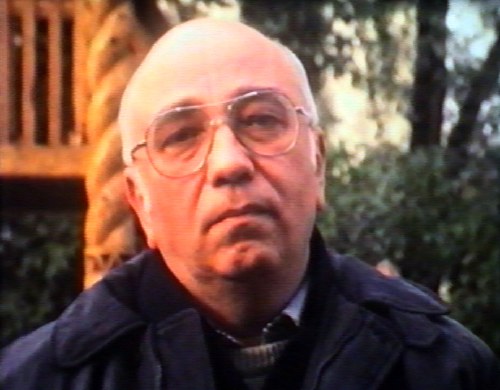 Vadim Khrapatchev was born in Kiev in 1947. He studied musicology at Kiev State Music Academy in the 70's and composition at Odessa State Music Academy in the 80’s. In 1973 Vadim Khrapatchev began working for the famous Dovzhenko Film Studios and it was the beginning of his long and fruitful career as a film composer. Occasionally he contributed his works to other prominent movie institutions like Mosfilm or Gorky Film Studio as well as to lesser known, but nevertheless acknowledged ones like Ukranimafilm. Working exclusively as a movie composer most of the time, Vadim Khrapatchev has also written a symphony in two movements with a solo quartet as a graduate thesis at Odessa Music Academy.

As of today Vadim Khrapatchev has composed more than a hundred soundtracks to motion pictures, animated movies, documentaries and theatrical performances. Most of them were incredibly successful, winning numerous national and international awards. The abovementioned drama «Flights in dreams and reality» was no exception, gathering more than 6 million viewers in cinemas when it was released.

While watching movies featuring his music you may sometimes wonder how seamlessly his compositions are able to blend with the visuals, perfectly matching a certain scene and always setting the right mood for it. In order to get the highest quality result possible the composer had to work very closely with the film directors thus developing a lifetime friendship with Roman Balayan — a classic of soviet drama, and Yevghen Syvokon — a classic of Ukrainian animation movies.

«Flights in dreams and reality» was based upon a screenplay by Viktor Merezhko and directed by Roman Balayan in 1981-1982. It featured a stellar cast of soviet acting legends of that time like Oleg Yankovskiy (1944-2009), Lyudmila Gurchenko (1935-2011), Oleg Tabakov, Aleksandr Adabashyan and Oleg Menshikov. This dark and depressive drama, shot entirely in locations of Vladimir city, tells us a story of an average soviet man living through a mid-life crisis. In order to overcome his uncomfortable state, the main character commits a series of provocative actions which may seem extravagant and funny on one side, but quite harmful and unpleasant to his friends and environment on another.

Initially being granted a very limited release, the film was not made available until early 1983 and was not widely seen until the time of Perestroika. After being exposed to larger audiences, it went on to gain critical acclaim. As composer recalls, “lots of adult, grown-up men were shedding tears after leaving the cinema” when it was shown in Kiev in 1983. Indeed, an image of a lost soviet man, played by talented Oleg Yankovskiy, with his anxiety, frustration, unmet expectations, lack of responsibility (which leads to more troubles and complications instead of relief) was depicted so precisely that it resonated in the hearts of the audience immensely, gaining a status of an instant classic among serious movie lovers. For his excellent acting Yankovskiy received the USSR State Prize afterwards.

Both electronic themes for «Flights in dreams and reality» were recorded at USSR's Melodiya major label facility in a quite short period of 15th -16th of April in 1982. The music was made on a legendary EMS Synthi 100 analogue synthesizer which was in Melodiya’s possession at that time.

The synthesizer programming and tuning was assisted by the label's staff recording engineer Yuri Bogdanov, who also plays guitar at «Танец» (The Dance), present on the A side of this record. Composed in its initial E minor scale, «Танец» has a slightly slower tempo than the one that can be heard in the movie. Apparently due to severe chronographic limitations during film-making process, the tape was heavily cut and sped-up by the movie crew in order to fit into the film’s key moments, which was a common practice at that time. We still need to contact the director, Roman Balayan to make it clear, so let’s hope that the “faster” version is being archived somewhere. Nevertheless, what we have on this record is the original work, made and submitted by the composer for the movie score in spring of 1982.

The second track, «Финал» (The Finale), is far more interesting. In the middle of the composition you may hear four string chords, performed by state symphonic orchestra of Ukraine under direction of its chief conductor Fedor Gluschenko, a fellow musician of the composer and his longtime friend. These chords were specially recorded by Vadim Krapatchev in Kiev and later were looped and mixed up on a multichannel reel-to-reel tape recorder when he got back to Moscow to finish the score. Before adding it into movie, the «Финал» was cut by the movie staff too – its fragments were used in the opening titles as well as by the end of the film, depicting an escape from everyday problems while the main character descends into a dreamy embryo state after hiding himself into the stack of hay. Towards the end of this composition all 12 oscillators of the Synthi 100 were activated, resulting into a powerful and energetic chord — a really rewarding listening experience when you play this track completely from the beginning to the end.

It is worth saying that shortly before Soviet Union fall in the 90's, its state recording company Melodiya had planned to release a 10" of Vadim Khrapatchev’s works, including the abovementioned compositions for «Flights». Other songs to be released were music for «Two Hussars» by Vyacheslav Kristofovich and «The Kiss», also a movie of Roman Balayan. The process was near to completion, tracks mastered and got ready for pressing but this never happened because at the beginning of 90’s Melodiya collapsed.

The disintegration of Melodiya worth a separate story. Fortunately the label managed to preserve most of its tapes until today, digitizing them now from its archives and even sharing some of them with us via their Soundlcoud page. The company is still active, however none of the numerous Melodiya's facilities function today — back then it was such a huge corporation that used to have its own pressing plants located in Aprelevka, Moscow, Tashkent, Riga, Leningrad etc. Sadly the major part of Melodiya's assets including the equipment disappeared in the disturbing 90's — an irreparable loss for the contemporary music culture. 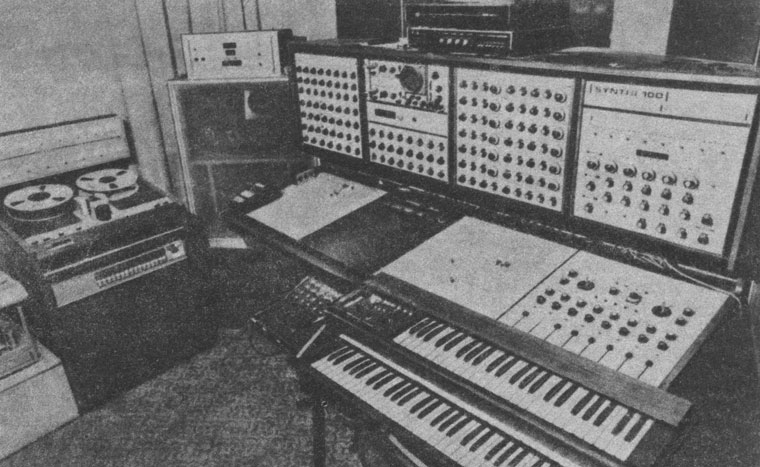 Speaking of Synthi 100: its fate was not that bad in the end. Brought in the mid-70's to Soviet Union personally by its creator and EMS chairman, Peter Zinovieff, the synthesizer had its hour of triumph in the 80's until its decline by the end of the decade. Apparently the musicians who were working with it eventually lost their interest and the instrument was not cared about for a long period of time. Rumours say that this unit was nearly destroyed in the beginning of 90's. While being often moved between different locations the synthesizer lost some of its circuits during transportation, some of them where even trashed and it nearly survived those hard times.

By the end of 2000's this particular unit mysteriously appeared in Canada in a pretty poor state and after painstaking restoration over a course of two years, it got a new life. Currently the soviet Synthi 100 resides in Canada's National Music Centre, a non-profit organization, formerly known as Cantos Museum.

Of course the most prominent user of this magnificent machine which comes to mind is Edouard Artemiev. Nearly every his LP features sounds from Synthi 100, however he was not the only one who had unlimited access to this synthesizer. We might name a few others who were keen enough to experiment with this rare instrument and record some wonderful electronic music: composers like Vladimir Martynov, Alexei Rybnikov, Sven Grünberg and Boris Petrov (who recorded only one but really interesting and totally underestimated LP), engineers like Yuri Bogdanov, rock and pop producers like Alexander Gradsky, Igor Len and many others. Ukrainian composer Vadim Khrapatchev is another great name among the successful users of this instrument and with these two works he adds an essential contribution to the heritage of electronic music made on Synthi 100.

Having spent more than three decades in the composer's archive after their original appearance, the film's themes were digitized from tape in Kiev last year and kindly provided to us this summer by the author himself. We believe that these two compositions are an amazing discovery for all serious listeners of electronic music and hope to continue collaborating with Vadim Khrapatchev, Ukraine's most notable movie composer, eventually exposing more of his music to the world on vinyl records.